A Lord of the Rings Primer: The Maiar, Servants of the Secret Fire 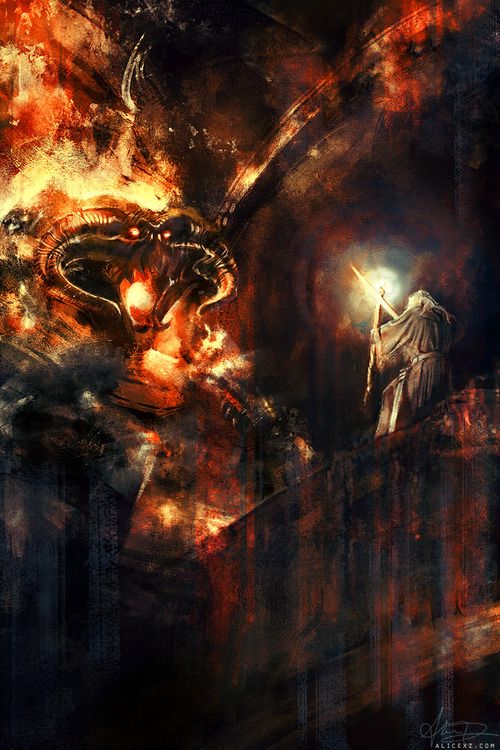 The Maiar of LotR

In the Lord of the Rings cosmology (which, sadly but understandably, was not completely covered in the film series), the Maiar are some of the first beings willed into existence by the series’ equivalent of God: Eru Ilúvatar. The Maiar are part of the Ainur, a race of primordial spirits that Iluvatar created to help him both shape the world (known as Arda) and enact his Will (e.g. ‘awakening’ the Children of Iluvatar, guiding the different races with benevolence, etc.).

The Ainur are separated into two distinct sub-categories: the Valar and the Maiar. The Valar are basically the LotR’s version of Gods, or, at least, quasi-gods, while the Maiar is basically powerful, immortal, guardian spirits that help the Valar with their mission.

Every Maiar is associated with a specific Vala, and they usually share various similarities in terms of the scope of their responsibility and power, albeit the Maiar is less powerful than their Valar counterparts. For example, one of the most infamous Maia is Curumo, known better to people as Saruman. Before being sent to Arda as part of the Istar, or the Council of Wizards, Saruman was a Maia that served Aulë, the Vala of the smith. Aulë was a Vala who excelled at creating things: he was the one who crafted the great towers that held the laps Illuin and Ormal before the creation of the sun, and he was also the Vala who created the Dwarves. Curumo learned from Aulë and took his lessons with him when he became Saruman, but unfortunately, he used these to breed the Uruk-hai, a race of brutal warriors that Saruman used in service to Sauron.

Another popular Maia is Olórin, better known as Gandalf. Originally a Maia in service to Manwë, the Vala of the winds and the King of the Valar, Olórin was sent to Arda as part of the Istar, taking the name Gandalf upon his arrival. Unlike his peer Saruman, however, Gandalf spent most of his time in Middle-earth learning about patience, humility, and sympathy, eventually turning him into the wisest, and most powerful, of the Maia.

But perhaps the best-known Maia is Mairon, known to the elves as Sauron, the Abhorred. Mairon was also a Maia that followed Aulë, and from him, he learned the secrets of smithing and creating objects that contained vast amounts of power. However, Mairon was soon corrupted by the evil Valar Morgoth, the most evil of the LotR legendarium, eventually turning into Morgoth’s chief lieutenant. Sauron used his vast power and knowledge to create the Ring of Power, one of the most, if not the most, powerful weapon in the entire Lord of the Rings series.

Characteristics of the Maiar

As spirits, the Maiar do not necessarily have a fixed, physical form, choosing only to take shape when it suits their purposes: most of the Istar chose the form wizened old men (although Olórin, known as Gandalf, walked Middle-earth in various forms before choosing his well-known image as an old man in grey), while Arien, the Maia who pilots the Sun, is described as a spirit made of fire (one of the only fire spirits uncorrupted by Morgoth).

But just like the Valar, this power to shape-shift can be lost if they become corrupted by hate and anger: prior to his fall, Melkor was one of the most beautiful of the Valar, but after his corruption, became a spirit consisting of fire and shadow (something that the Balrogs, fire spirits that chose to serve him when Melkor became Morgoth, chose to copy).

As primordial beings, both the Maiar and the Valar are practically immortal: despite their physical forms being destroyed, a Maiar can wander the earth as an ethereal spirit, their powers diminished until they either take physical form once again or are restored by their Valar. This is mentioned in the Silmarils, when Lúthien remarks to Sauron after his defeat in the Tower of Werewolves:

“Ere [Sauron’s] spirit left its dark house, Lúthien came to him and that he should be stripped of his raiment of flesh, and his ghost sent quaking back to Morgoth; and she said ‘There everlastingly thy naked self shall endure the torment of his scorn, pierced by his eyes unless thou yield to me the mastery of thy tower.'”

Another example of this power is Gandalf, who, upon defeating the Balrog of Moria at the mountain peak of Zirakzigil, was resurrected by the Valar and sent back to Arda:

“Naked I was sent back – for a brief time until my task is done. And naked I lay upon the mountain-top. There I lay staring upward, while the stars wheeled over, and each day was as long as a life age of the earth.”

Powers of the Maiar

As divine beings, their powers and abilities are practically immeasurable and infinitely diverse: although each Maia learned and perfected the abilities demonstrated by their chosen Valar, they still have the power to shape or re-shape the world as they see fit. As primordial spirits, the Maiar can teleport anywhere within Arda and can either use their powers directly (to shape the world) or indirectly (to influence people).

This is why magic in the LotR universe is a tricky subject: most of the magic we see, both in the books and the movies, are either small enchantments that trick the eye or world-changing spells that alter the very fabric of existence. When Gandalf said “YOU SHALL NOT PASS!” to the Balrog, it wasn’t just an empty threat: it was an active spell that meant that the Balrog of Moria will never, in any way, shape, or form, be able to cross the Bridge of Khazad-dûm.

PrevPreviousA Lord of the Rings Primer: Morgoth, The Black Foe of the World
NextSaruman, Radagast the Brown, and the Blue Wizards: LotR’s Lost WizardsNext