A Rundown of Harry Potter’s Girlfriends, Flings, and Dates 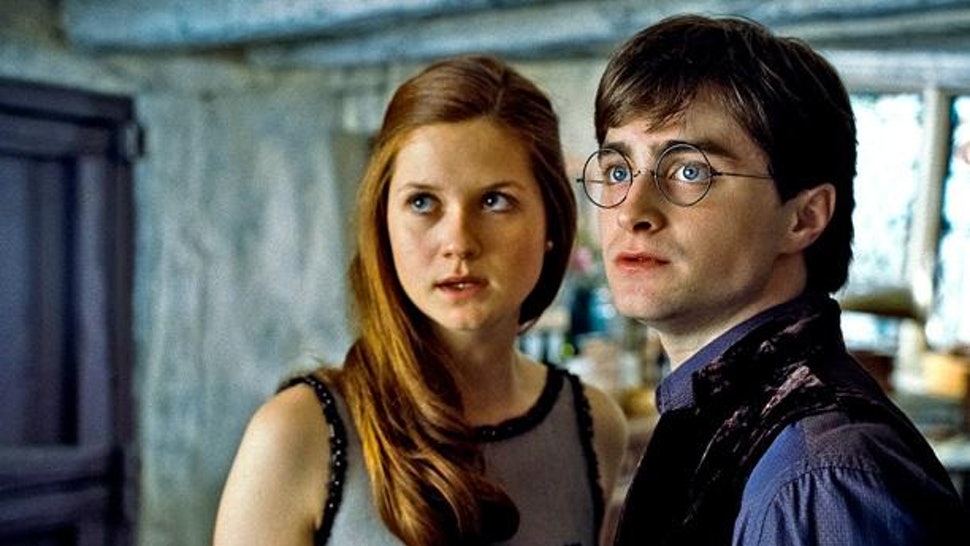 The Harry Potter franchise (or as it’s later known after its expansion, the Wizarding World franchise) is about magic, love, and a whole other universe of witches and wizards hiding in plain sight. But what a lot of people also forget is that the first six books and six films of the series is actually a look into the wizarding equivalent of high school drama.

And with that drama comes a list of failed romances, broken hearts, and dates gone wrong.

Harry, being the main character of the series, had his fair share of girlfriends and flings. And while most people may only remember Harry Potter’s two girlfriends, there’s actually a much longer list of girls he was romantically involved with – or at least, supposedly.

If we have to make a list of girls The Boy Who Lived romanced, we’d definitely have to start with Ginevra Molly Weasley, better known in the series as Ginny. The youngest of the seven Weasley children (and actually the first female born into the Weasley clan for a few generations), she’s the sister of Harry’s best friend, Ron.

Harry and Ginny first meet at King’s Cross Station when she joins her mother in accompanying her brothers Ron, George, Fred, and Percy to the Hogwarts Express. At the time, the 10-year old Ginny had no idea her family had helped the famous Harry Potter but was immediately intrigued when she learned who he was. It was around this time when she first developed a crush on Harry.

Prior to her first year at Hogwarts, Ginny had been talking about Harry the entire summer and was teased by her brothers for having a crush on him. After getting sorted into Gryffindor, she discovered Tom Riddle’s diary among her belongings and discovered how Tom Riddle (later known as Lord Voldemort) would write back to her. Harry would later save her from the Chamber of Secrets. She would still have a small crush on him the year after, sometimes finding it difficult to look him in the eye.

In her third year of Hogwarts, she shared her bedroom with a visiting Hermione Granger, who advised Ginny to be more relaxed around Harry and start going out with other boys until Harry starts to take notice of her. Though she was still a bit shy around Harry, she seemed more relaxed. She accepted her friend Neville Longbottom’s invite to be his date to the Yule Ball, though might have regretted it when Ron suggested Harry (who was desperately looking for a date) take her instead. Whether or not she did, she remained loyal to her agreement and went with Neville, though was annoyed when she learned Harry had asked his crush Cho Chang (though he was turned down). During the ball, she met a Ravenclaw boy named Michael Corner and began dating him at the end of the year.

Because of her relationship with Michael, Ginny was no longer shy towards him on her fourth year of Hogwarts and saw him more as a friend and her brother’s best friend. During Easter, she and Harry had their first one-on-one conversation together as friends. She would later go on to help Harry at the Battle of the Department of Mysteries. She would eventually break up with Michael Corner and start dating Dean Thomas, a friend of Ron and Harry.

The following school year, Ginny left Dean and eventually started dating Harry. However, after Dumbledore’s death, Harry decided to break up with her in case Voldemort tried to use her against him. Ginny took this in stride as she knew it was for a noble reason.

The year after, with Harry, Ron, and Hermione on the run and hunting Horcruxes, Ginny attended Hogwarts for her sixth year and revived Dumbledore’s Army with Neville and Luna. After the Battle of Hogwarts, she and Harry would go on to restart their relationship and eventually marry and have three children.

While Parvati Patil was a part of Harry’s life for one night due to Harry’s desperation, the fact that she was once the date of the famous wizard makes her a part of the list. In Harry’s fourth year, he was one of the Triwizard Tournament’s champions and was thus required to find a date to accompany him to the Yule Ball. His preferred choice, Cho Chang, was already taken, while Hermione and Ginny had already made commitments to other boys (namely Viktor Krum and Neville Longbottom, respectively). When he found out that his Gryffindor classmate, Parvati, and her twin sister, Ravenclaw Padma, still did not have dates, he had asked her to be his date.

However, despite the attention Parvati got for being Harry Potter’s date, her Yule Ball experience with Harry was underwhelming. After leading the first dance with Harry and the other champions with their dates, it was clear Harry was only interested in Cho and would not stop looking at her.

Being such a horrible date to Parvati, it was no surprise that she got annoyed and accepted a dance from the first boy who offered, a boy from Beauxbatons (though in the film Harry Potter and the Goblet of Fire, it was Igor Karkaroff’s Aide). She and the boy dated for an unknown amount of time. She would act coolly towards Harry for the rest of the year, but her attitude towards him improved by the time Harry started Dumbledore’s Army since both she and her sister joined.

The only other girl in Harry’s life who made it towards girlfriend status, Cho Chang is a year older than Harry and was sorted into Ravenclaw. Harry first met Cho when they were both competing in Quidditch matches against each other. Unlike the other teams that were competitive against each other, Cho would wish Harry good luck even though they were both Seekers. She would be the first girl Harry would develop a crush on at Hogwarts.

While Harry began to develop feelings for Cho to the point that he was the first girl he considered taking to the Yule Ball, Cho was on friendly terms with him but was more interested in Cedric Diggory. Cedric asked her to the ball first, and she gently rejected Harry’s invite. Harry would spend the whole night watching them. Unfortunately for Harry, Cho soon began dating Cedric until his death towards the end of the school year.

Cho and her best friend, Marietta Edgecomb, would later join Dumbledore’s Army despite Marietta’s reluctance and both Cho and Marietta’s parents working for the Ministry of Magic. There, she and Harry eventually shared their first kiss and began dating. On their Valentine’s Day date, however, Cho became jealous of Harry’s friendship with Hermione and upset about Harry’s reluctance to talk about Cedric.

In the books, it was Marietta who revealed to Dolores Umbridge about the existence of Dumbledore’s Army. As a result of Marietta’s betrayal, the word “SNEAK” appeared on her face and could not be removed because Hermione enchanted the signup sheet. Harry found the result fitting, but Cho defended Marietta and claimed Harry found it funny because Hermione did it, and this led to the end of their relationship.

In the film series, it was Cho herself who revealed Dumbledore’s Army after much pressure from Umbridge and her parents. As a result, everyone in the club (except Cho herself) was forced to perform detention using Umbridge’s enchanted pens. When Cho tried to talk to Harry afterward, he ignored her.

This, however, did not stop Cho from supporting Harry’s side of the wizarding war. Cho went on to date Roger Davies and later on Michael Corner, who broke off his relationship with Ginny Weasley shortly before moving onto Cho. And despite being in her final year, she returned to Hogwarts the following year during the Battle of Hogwarts to fight alongside Harry. After the war, she married an unnamed Muggle.

After the events of Harry Potter and the Order of the Phoenix and Harry was revealed to be telling the truth about Voldemort’s return, he was no longer considered a social outcast and became popular once more. During his sixth year at Hogwarts, there were a number of unnamed Hogwarts students who were implied to have had a crush on the famous Harry Potter, but none of the girls were as bold as the fourth-year Gryffindor student, Romilda Vane.

On the Hogwarts Express, Romilda invited Harry to sit with them instead of those she thought were unpopular, namely Luna Lovegood and Neville Longbottom. However, this insulted Harry as he considered them his friends and coldly rejected her. She later tried out for the Gryffindor Quidditch team, but it was clear to Harry that they weren’t serious about the sport and asked them to leave. Instead, they remained in the stadium to heckle the other try-outs.

During that year, Hermione, acting as Prefect, overheard Romilda and other girls plotting to give Harry a love potion so that Harry could ask them to be his date to Slughorn’s Christmas Party. Because she couldn’t apprehend them since they didn’t have the love potions on their persons, she simply warned Harry from accepting things from Romilda and her friends. True enough, upon his return to the Gryffindor common room, Romilda offered him some gillywater, which he refused. She then forced into his hands a box of Chocolate Cauldrons, which he kept in his trunk until March. Unfortunately, this ended up in Ron’s possession.

Eventually, she would respectfully stop her advances when Harry and Ginny started dating. However, the first time she saw Harry kiss Ginny, she looked upset. She would later ply Ginny with questions about Harry.

Despite this, Romilda would go on to become a member of Dumbledore’s Army and fight alongside the Battle of Hogwarts. It’s unknown what she does after the war, but she does make a cameo in Harry Potter: Wizards Unite where one of her belongings was lost during the Calamity. If you successfully capture a music box topped with a ballet troll, you might be informed that the Statute of Secrecy Task Force was returned.

Luna Lovegood was introduced in Harry’s fifth year as one of Ginny’s Ravenclaw friends. Due to her upbringing, she had a strange behavior and had odd beliefs which she picked up from her father. Because of this, she did not have a lot of friends aside from Ginny and was given the name “Loony Lovegood.”

While Ron and Hermione did not have a good opinion of her at first, she and Harry shared similar backgrounds: as a young child, Luna has also witnessed the death of her mother. As a result, only she and Harry (who watched his own mother die as a baby) are the only students who can see Thestrals on Hogwarts grounds.

Eventually, she joined Dumbledore’s Army and became one of Harry’s friends. On Harry’s sixth year, he started spending more time with Neville and Luna since Ron and Hermione were more occupied with their prefect duties. When Harry learned that girls were plotting to spike him with a love potion so that he would take them to Slughorn’s party, he asked Luna to go with him so that they would stop.

After the war, Harry and Ginny would end up naming their daughter Lily Luna Potter, after Harry’s mother and Luna herself.

While Ginny was Harry’s true love that survived the series, who was your favorite among Harry Potter’s relationships? Let us know!

PrevPreviousHarry Potter Film Ratings in the US and the UK
NextMagic Deathmatch: Percy Jackson vs. Harry PotterNext