Franchise Deathmatch 2: Lord of the Rings vs. Harry Potter 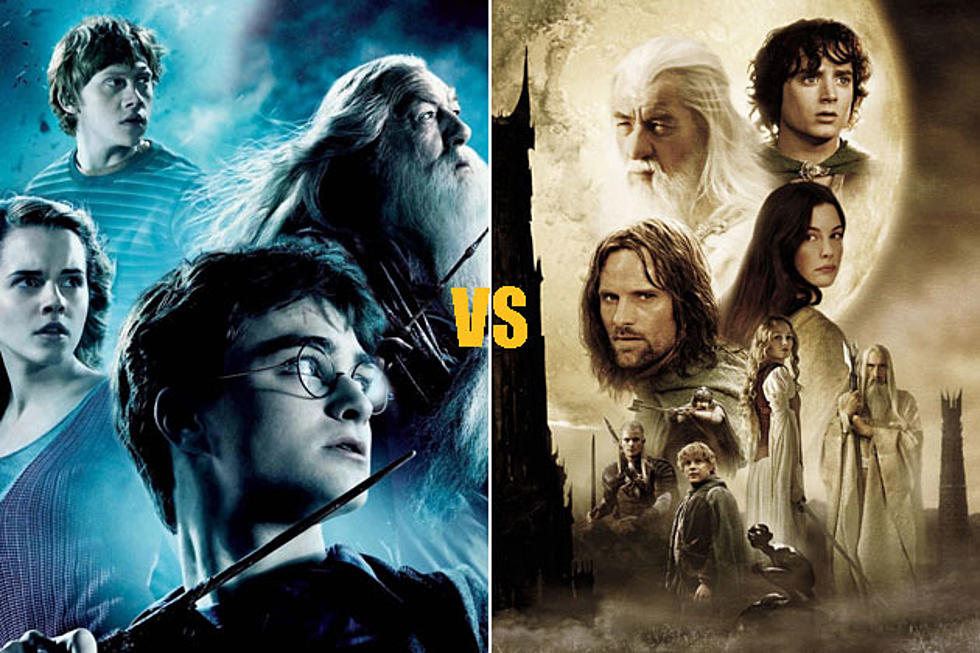 In an earlier article, we pit Percy Jackson against Harry Potter in both a magical deathmatch, and a franchise showdown, with both instances seeing Harry and the gang triumph over the Riordan’s demi-gods. But that’s Young Adult Literature stuff; how would The Boy Who Lived live up against the granddaddy of modern fantasy epics: The Lord of the Rings?

Written from 1937 to 1949, the Lord of the Rings is one of the most widely read, widely sold, and widely appreciated fantasy novels out there, spawning millions of dollars of merchandise, decades of videogames, inspired scores of metal albums (Led Zeppelin was basically a LOTR fan band), 3 blockbuster movies, and 3 meh spinoffs. But is their magic more powerful than the Wizarding World? Let’s take a look:

The Lord of the Rings

Right off the bat, let’s get one thing clear: measuring book sales is an inexact science, and finding the book with the most sales is not only difficult but maybe even impossible. That being said, what we do know is that, since its publication back in 1954, The Lord of the Rings by J.R.R. Tolkien is one of the highest-selling books of all time, with an estimated 150 million books sold since the ’50s. Of course, this pales in comparison to Mao’s Little Red Book, which is estimated at 800-900 million copies, or The Bible, with an estimated 5 billion copies sold since they started keeping records.

Of course, Mao was required reading for all citizens of China (not having a copy was punishable by jail time, after all), and the Bible is, well, the Bible. With respect to those books, however, The Lord of the Rings has dominated book sales since its release, with the re-release of the book into three parts back in 2001 bolstering sales further. Despite this, however, sales of the individual books (Fellowship of the Ring, Two Towers, Return of the King) all count as one because, well, they really do just encompass a single book. All of these sales translate to a cool $2.25 billion and counting, not factoring in related books (like world guides, character guides, etc.), used copies, and other printed media connected to the franchise.

Combined, the Lord of the Rings trilogy earned $2.917 billion in worldwide box office sales against a budget of $367 million, making it a box office success and an instant classic to both fans and critics everywhere. Sure, they cut out a few key elements (like Tom Bombadil and the entire reclamation of the Shire), but at 11.4 hours total run time, the trilogy needed the trim.

Culturally speaking, the Lord of the Rings movies made such an impact that it pretty much revolutionized not just the movie experience for viewers, but film-making in general, with Peter Jackson and crew employing state-of-the-art film making techniques that are still in use today. They also single-handedly revived the tourism industry of New Zealand where the films were shot, so that $2.917 billion isn’t even counting the revenue the movies generated for the Kiwis. Suffice to say, it was a significant boost.

Because of its nature as a series, it’s hard to compare Harry Potter book sales with the Lord of the Rings, so we’ll look at Harry Potter’s most successful book, and Harry Potter the series as a whole.

The Harry Potter movies (not including the Wizarding World spin-off Fantastic Beasts and Where to Find Them) have a worldwide total gross revenue of $7.7 billion against a total budget of $1.5 billion. This is, of course, taking into account 8 movies as compared to the LoTR franchises 3. But even if we took just the first 3 movies of the Harry Potter series, it would still come out to $2.6 billion in worldwide box office profits, only missing the benchmark LoTR set by a couple of a hundred million (which, in movie terms, isn’t that much).

In terms of cultural impact, the Harry Potter movies redefined the term “media franchise” and was able to leverage its early popularity (along with the technological leaps of the first decade of the 21st century) to create multiple supplementary revenue streams like videogames, merchandise, theme parks, an interactive web series, an entirely new spin-off prequel series, and many more.

As a lifelong Tolkien fan, it pains me to say this: the Harry Potter franchise clearly outclasses the Lord of the Rings by a margin of, like, a lot: the Middle-Earth franchise, which encompasses book sales, total box office gross revenue (of the original trilogy), video games, licensing, home video sales, and merchandise, total a whopping $19.9 billion.

This seems like a lot until you take a look at the Wizarding World franchise, which, factoring in the same things as Middle-Earth, rakes in a staggering $31 billion, making it the 11th most successful media franchise ever (just a couple billion shy of the Marvel Cinematic Universe).

So, sorry Frodo! Looks like Harry Potter wins the day.