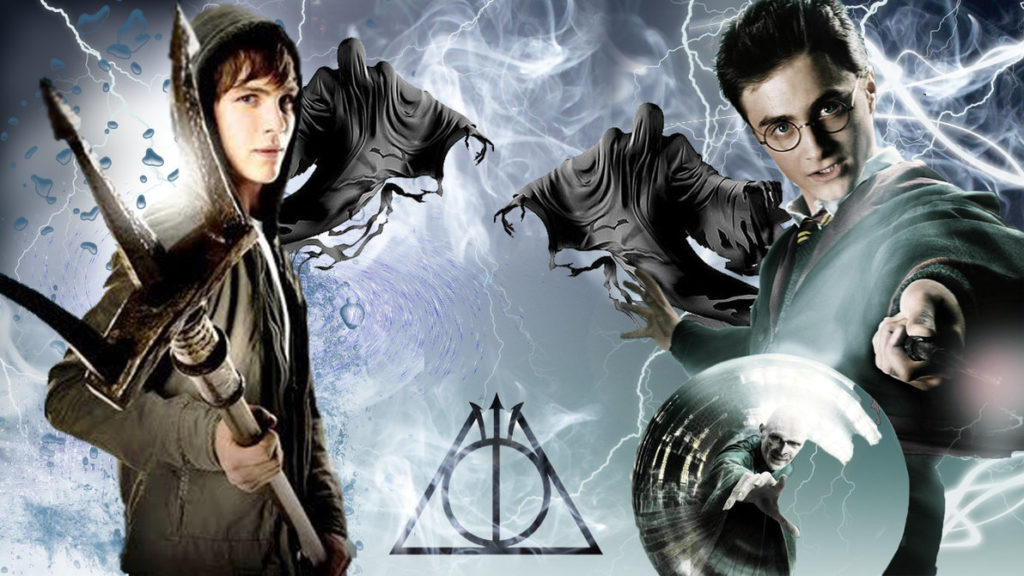 In an earlier article, we analyzed Percy Jackson and Harry Potter strictly from an abilities and equipment sense to see who would survive a no-holds-barred magical deathmatch (spoiler alert: Percy wins), but now let’s take a look at how their respective franchises did and see which one raked in the bigger bucks to bury the competition.

NOTE: to make this article a little more succinct, we took a look only at the released movies of each franchise, without taking into account merchandising, books, additional sources, cultural impact, video games, etc.

Results also have not been adjusted for inflation (the first Harry Potter films came out in the early 2000s, while Percy Jackson came out in 2010), although, as you’ll see in the outcome, even with inflation, the results are pretty solid.

Rick Riordan’s wildly successful Percy Jackson and the Olympians book franchise made its big-screen debut in 2010 with the release of Percy Jackson and the Olympians: The Lightning Thief back in 2010 and followed by Percy Jackson: Sea of Monsters in 2013. Both films star Logan Lerman as the titular hero, and backed by a bevy of young, attractive 20-somethings as his Camp Half-Blood allies. The first film, The Lightning Thief, was directed by Chris Columbus (the same Columbus who directed the first two Harry Potter movies in ’01 and ’02), while the Sea of Monsters was directed by the German director and special effects artist Thor Freudenthal. Both movies earned a total of $430 million against a combined budget of $185 million, technically making it a box office success. Both movies, unfortunately, received mixed to negative reviews from critics, a crucial factor in the studio’s decision to nix a planned third film.

Plans for a film adaptation of Percy Jackson started in 2004, when 20th Century Fox bought the feature film rights to the book, tasking Chris Columbus to helm the project in 2007. Filming began in Vancouver in April of 2009, with the film ultimately being released in February of 2010. Against a budget of $95 million, the movie grossed $227 million worldwide, making it a commercial success. Critical and audience reviews, however, were less impressive, with many criticizing the film’s lack of originality, lack of humor, and a lack of fun that the books were known for. Despite these reviews, plans for a sequel pushed through.

Following the commercial success of the first film, 20th Century Fox greenlit a sequel, Percy Jackson: Sea of Monsters, in October of 2011, with filming beginning in April the following year. The movie was released in August of 2013 after being pushed back from its original March 2013 release date. It made $200 million worldwide against a $90 million budget, again making it a box office success, but again falling for the same exact criticism of the first film: thin storyline, frenetic pacing, uninteresting characters, and shallow treatment of an otherwise poignant source.

A third film, The Titan’s Curse, was scheduled to start filming soon after the second movie’s release. However, a lack of interest forced the studio to pull the plug. As of 2019, all rights to Percy Jackson and the Olympians are now owned by the Walt Disney Company.

Talks of adapting J.K. Rowling’s wildly successful Harry Potter series into the big screen started in 1999 when Warner Bros. bought the film rights of the first book Harry Potter and the Sorcerer’s Stone. The film was followed by 7 other movies, all based on the Harry Potter series, with the last book, Harry Potter and the Deathly Hallows, being adapted into two movies. The movie series themselves launched the careers of Daniel Radcliffe and Emma Watson, not to mention inspiring Warner Bros. to create a spin-off prequel series in 2016 and expanding the entire Harry Potter world into the shared media franchise called Wizarding World. The movies also spawned Harry Potter World in Universal Studios, a handful of videogames, and dozens of resource books about the films.

Production took place from 2001 all the way to 2011, with almost all of the movies following the source material as closely as possible. Throughout production, J.K. Rowling had unprecedented creative control, serving as the final say in casting, scriptwriting, directorial choice, and even merchandising. This allowed the series to remain as truthful to the books even with the movies condensing certain aspects of the story to fit cinematic runtimes, something Percy Jackson failed to accomplish. The series featured four different directors: Chris Columbus, Alfonso Cuaron, Mike Newell, and David Yates.

Three out of the eight films are counted in the 50 Highest-Grossing Films of All Time, with the entire series considered a “tent pole” franchise like Star Wars or James Bond. Combined, the 8 films cost $1.2 billion to produce, with overall worldwide box office performance at a whopping $7.7 billion, not including profits from videogames, merchandise, books, theme parks, and Bertie Bott’s Every Flavor Beans.

This one isn’t even a competition; Harry Potter decisively wins this battle by a huge margin. Sure, you can argue that the Harry Potter film franchise has 8 movies across an entire decade while Percy Jackson only has 2. With Harry Potter’s rating enjoying the top spot in multiple media rating franchises and Percy Jackson not even close, this should come as absolutely no surprise to anyone.

But see, therein lies the rub: Percy Jackson didn’t have the numbers to compete on any serious level, and while we could go on about how studio meddling pretty much torpedoed any chance of the Percy Jackson series turning into a trilogy, let alone a 5-movie deal, the fact remains that even if we took the profits of individual movies into play, Harry Potter and the Sorcerer’s Stone and Harry Potter and the Chamber of Secrets would still beat Percy Jackson and the Olympians: The Lightning Thief and Percy Jackson: Sea of Monsters any day of the week.

What’s the secret? Well, it boils down to two things: timing and meddling. Timing played a crucial role in the success of the Harry Potter franchise because, frankly, it was one of the first YAL franchises that successfully transitioned from page to screen. Percy Jackson, while just as strong of a book franchise and just as unique, unfortunately, came second: one of the biggest criticisms thrown at the Percy Jackson movies was that it looked and felt like a Harry Potter rip-off. It wasn’t, although it could be because both Lightning Thief and Sorcerer’s Stone were directed by Chris Columbus and thus shared more than a few visual similarities.

And then of course, there was meddling, specifically, studio meddling. The Harry Potter franchise arguably suffered less meddling from studio execs than Percy Jackson ever did; the former stayed as true to the script as possible and involved J.K. Rowling’s input, while the latter kind of took what Rick Riordan told them with a grain of salt. In fact, Riordan’s been known to talk smack about the movies based on his books, which is never a good sign if the original author distances themselves from the big-screen adaptation.

So, there you have it, while a magic deathmatch might see Percy cleaving Harry in ‘twain with Riptide, real-world financial scores say that Harry and his private school gang can just about bury the Camp Half-Blood denizens under billions of dollars of profits. Which just goes to show you, money really is the best superpower!

PrevPreviousIt’s Time to Answer Which Hogwarts House is the Best (And It’s Not What You’d Expect)
NextThe Vaguest Harry Potter Trivia You’ll Ever Need?Next