A Lord of the Rings Primer: Morgoth, The Black Foe of the World 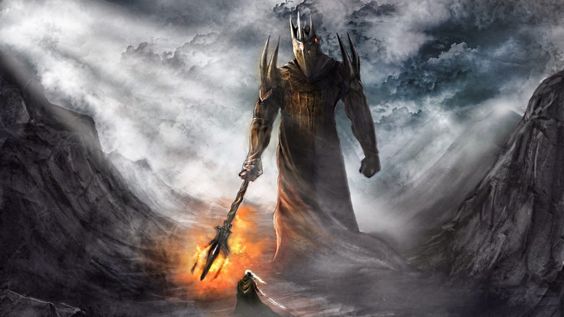 In the Lord of the Rings film series, the greatest evil to ever befall Middle-earth was presented as Sauron, the Great Deceiver, the Shadow in the East, the Dark One, the Necromancer, the Enemy, and the Servant of Morgoth.

But wait, who was Morgoth? And how could be the evilest figure of all Middle-earth be subject to anyone? As it turns out, Sauron pales in comparison to Morgoth, both in power, and cruelty.

In the beginning, there was only Eru Ilúvatar, Father of All and the Supreme Being in the Lord of the Rings cosmology. He emerged from the Great Void, and through him, created the Ainur: holy beings that include the Valar – the LOTR equivalent of quasi-gods that enacted the will of Ilúvatar –and the Maiar, powerful spirits that served the Valar. Among them was Melkor, later known as Morgoth. Out of all the Valar, Morgoth was the most powerful, the most knowledgeable, and the most independent.

This independence led him to search for more power, and so he wandered the Great Void in search of the Flame Imperishable, the source of Eru Ilúvatar’s power. He was unable to find it, but this time alone in the Void led his dark thoughts and ideas that were far different from those of his peers, eventually sowing the seeds of evil in the mighty Valar.

Ilúvatar eventually instructed his Ainur to ‘sing’ into existence the world. Ainulindalë, the Great Song, was sung by all the Ainur. During the Ainulindalë, Melkor embedded his malicious thoughts and ideas into his music, creating discord that corrupted the spirits around him. Ilúvatar rebuked him for this, which brought shame and anger to Melkor.

But the damage had been done: when the Ainulindalë was made incarnate into Arda, the world, it was already corrupted by Melkor’s discord.

Soon after the creation of Arda, the Valar started descending to it to give shape to the newly created lands. The Valar decided to serve Manwë as their Lord, greatly angering Melkor. This prompted him to openly rebel against his fellow Valar, actively undoing or disrupting the efforts of his siblings. For a long time, Arda remained formless, as the Valar and Melkor fought each other to a stalemate. Only after the arrival of Tulkas, Champion of the Valar and the only other Vala who could match Melkor’s strength, was Melkor defeated.

Humiliated, he left Arda to bide his time. During his absence, the rest of the Valar went about setting order to the world, creating mountains and fields and oceans. To give the new world light, the Vala Aulë, the most skilled smith of the Valar (and the creator of the Dwarven race), created two Lamps to illuminate Arda. Varda, Queen of the Valar and the Vala of the Stars, gave light to the lamps while her husband Manwë hallowed them.

For a time, there was peace, but soon, Melkor, now known as Morgoth, returned to Arda, along with evil spirits that were corrupted by the discord of his music. Together, they destroyed the Two Lamps and broke the world again. The Valar fled Middle-earth to Aman, a continent they had created west of Middle-earth, where they established the mythical land of Valinor.

Meanwhile, over at Middle-earth, Melkor began filling the land with dark creatures and evil spirits. With no one left to stop him, Morgoth virtually ruled Middle-earth, eventually creating Angband, his formidable fortress, which he gave to his chief lieutenant, Sauron, to control. Fearing a world-shattering confrontation, the Valar decided to stay in Aman and await the awakening of the first Children of Iluvatar.

The War for Sake of the Elves

Although most of Middle-earth had fallen to decay and evil, the Children of Ilúvatar, known as the Elves, soon awoke in Middle-earth. Because they were in Valinor, the Valar were unaware that the Firstborn had arisen, but Melkor was made aware: he captured some of the first Elves and corrupted them to become the first Orcs.

Once the Valar decided to return to Middle-earth to check, they found the uncorrupted Elves and asked them to return with them to Valinor. However, they also saw the Orcs, and deemed to be the foulest offense to Ilúvatar, and thus declared war on Melkor. The Valar host swiftly and decisively defeated Morgoth and his armies, bound him with the magic chain Angainor, and detained him in the Hall of Mandos for three ages.

After three ages, the Valar brought him before Manwë, where he fooled the Valar into thinking that he had changed. Under the guise of a reformed Vala, Morgoth slowly corrupted the Ñoldor, eventually corrupting Fëanor, kick-starting the War of the Jewels, and eventually, resulting in Morgoth’s defeat and banishment from Arda.

It is prophesied that one day, when the Powers (i.e. the Valar) grow weary, Morgoth will return to Arda via the Door of Night. His arrival will bring darkness across all of Arda, and he will wage war against the Valar and everything they had created. For their part, the Valar will gather the largest host it has ever mustered and will meet Morgoth for Dagor Dagorath: the final battle.

This battle will take place on the fields of Valinor, whereupon Tulkas will once again wrestle with Morgoth. However, it will be Túrin Turambar, son of Húrin, and his black sword, which will pierce Morgoth and finally bring to an end his tyranny.

The battle will be so severe that it will break the world once again, but this time, it shall be remade with Ilúvatar’s original design, with no discord from Morgoth: the Silmarils shall be recovered, the Two Trees shall be remade, and the Elves will fulfill Ilúvatar’s purpose for them. As for Men, not even Mandos knows what fate lies for them after the final battle. Only time, it seems, will tell.