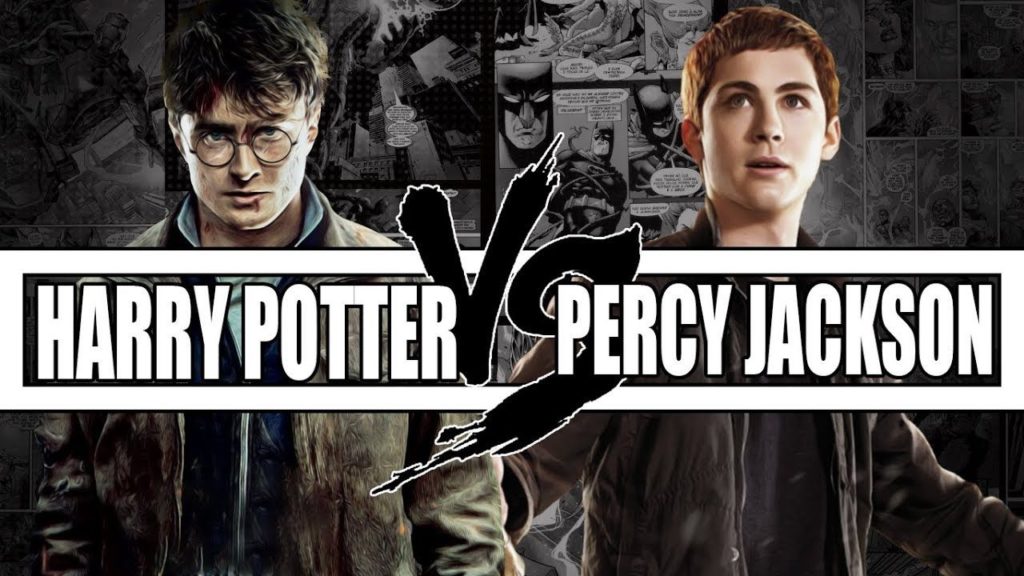 Imagine this: two of the most iconic Young Adult Literature characters, Harry Potter and Percy Jackson, somehow find themselves in an arena where they are pitted against each other in a no-holds-barred, fight-to-the-death, magical Deathmatch, with the winner taking…I don’t know, use your imagination.

Sounds pretty exciting, right? But hold your Pegasus and Thestrals, let’s take an in-depth look at each character and see which one can actually beat the other.

This is magic Deathmatch: Percy Jackson vs. Harry Potter.

Handsome with messy jet black hair, Percy Jackson looks pretty similar to the Boy who Lived, except for the former’s more “Mediterranean” complexion and sea-green eyes (courtesy of his father Poseidon), although thirsty friend Hazel describes Percy as looking like a Roman God, which I don’t know if that’s racist or not, but let’s let that slide.

The books describe Percy as having dyslexia and ADHD courtesy of his demigod attributes: the ADHD comes from his innate battle instincts, while the dyslexia is due to his propensity towards Ancient Greek rather than English. He fights with an unpredictable, Greek fighting style that has turned him into an expert swordsman. Percy also carries the Curse of Achilles, a condition that develops when one bathes in the River Styx. The Curse of Achilles renders a person nigh-invulnerable to any and all physical or magical damage, save for one weak spot (in Percy’s case, his lower back). The Curse also provides the person with increased strength, speed, reflexes, fighting skills, and an increase in their innate abilities. He also has an empathic link with Grover, his best friend. I don’t know how that’s helpful, but let’s throw that in any way.

Amongst the other demigods in Camp Half-Blood, Percy is one of the most powerful, considering he’s a son of Poseidon, one-third of the Big Three comprising Hades and Zeus. Some of Percy’s powers include, but not limited to:

Percy Jackson’s main weapon in battle is Anaklusmos or Riptide. Anaklusmos is made of celestial bronze, gifted to him by Chiron the Centaur at the behest of Poseidon. Riptide itself was used by the hero Heracles, who was given the sword by the daughter of Atlas, Zoë Nightshade.

Riptide itself has its own innate abilities, such as:

Other than this, Percy Jackson also has access to other magical weapons, such as:

“thin face”, “small and skinny for his age”, “knobbly knees”, Harry is basically the nerdy, pasty-white version of Percy Jackson, with the same messy jet black hair for good measure. He also has his famous lightning bolt scar across his forehead. He has bright green eyes, courtesy of his mom.

By the end of the 7th book, Harry Potter has become one of the best student wizards in Hogwarts, distinguishing himself among his peers in both broomsticks flying and Defense against the Dark Arts. Both skills he showcases throughout the series: he’s the youngest Gryffindor Quidditch team Seeker in over a century, a team he captains on his 6th year. His flying skill also saves him in his 4th year, when he uses his Firebolt to successfully outfly a Hungarian Horntail during the Triwizard Tournament.

His repeated skirmishes with both Voldemort and his Death Eaters made him, by necessity, an expert in anti-Dark Magic spells and protection against Dark Arts. In his third year, he was able to cast a very advanced (even for experienced adult Wizards) Patronus charm, something he uses effectively against Dementors. By his 5th year, Harry organizes Dumbledore’s Army, a quasi-resistance movement made up of Hogwarts students who were keen on learning more about Defense Against the Dark Arts, with Harry Potter as their de facto instructor. He achieved an ‘Outstanding’ in the same subject in his Ordinary Wizarding Levels, or O.W.L’s, exams, something that has been notoriously difficult to achieve, especially considering the Defense against the Dark Arts teachers Hogwarts receives.

His expertise in Defense against the Dark Arts turned Harry into a skilled Wizarding duelist, something he uses to dispatch many of his and Hogwarts’ enemies like various monsters, dark wizards, and of course, Voldemort. This expertise led to him being recruited by Minister of Magic Kingsley Shacklebolt as an Auror right after the Second Wizarding War, with Harry showcasing his skill and character in the Battle for Hogwarts and all other smaller skirmishes throughout the conflict. As Auror, him and best friends Ron Weasley and Hermione Granger managed to revolutionize the entire Department of Magical Law Enforcement, and in extension, the entire Ministry itself. By the age of 26, Harry Potter became the Head of the Auror Office.

Harry’s entire offensive arsenal can be condensed into two things: his expert knowledge of offensive magic spells, and his wand. He uses an 11-inch Holly and Phoenix feather wand that was once a twin to Voldemort’s wand. He is also the rightful master of the Elder Wand, arguably the most powerful magical artifact in the world. However, he left this in Dumbledore’s tomb shortly after the Second Wizarding War.

Other than that, he also has in his possession his father’s Invisibility Cloak, one of the Deathly Hallows. Apart from rendering him completely invisible from both physical and magical means, it can also theoretically ‘hide’ him from Death itself. He also owns a magical pouch that can store items that only the owner can get out.

In canonical literature written after Deathly Hallows and the Battle of Hogwarts, it’s revealed that Harry Potter grows up to be one of the most influential and effective Aurors in the Ministry of Magic, whose sole job is to hunt down and bring to justice Dark Wizards, kind of like the magical equivalent of a wizard FBI agent. Percy Jackson, on the other hand, fights through various rogue Gods and Titan plans for a world takeover before finally defeating the granddaddy Titan of all, Kronos (stylized as KRONOS in Last Olympian).

So basically, it’s a former child-soldier-turned-Law-Enforcement-Agent vs. a seasoned war hero and career soldier. It’s really no contest: Percy Jackson, in a no-holds-barred magical Deathmatch, would win over Harry Potter. Not only is Percy armed to the teeth with some of Greek mythology’s most powerful artifacts, he’s also a demigod. Let that sink in.

Now, one could argue that Harry defeated one of the most powerful Dark Wizard’s of our time, but bear in mind: he was the only one physically and magically capable of defeating Voldemort because of his nature as the latter’s Horcrux. Of course, all of the pain and trauma Harry went through throughout his life was instrumental in channeling his energy into defeating You Know Who using the Elder Wand, I wonder if he’ll be able to use this against Percy, who not only undergoes constant training to hone his demigod powers in Camp Half-Blood but is again a freaking demigod.

I’ve heard some people argue: but Harry has the Deathly Hallows and has thus mastered death itself!

Eh, not so. Remember that, while he still owns the Invisibility Cloak (which he could theoretically use to ‘hide’ from death), and he is still the rightful owner of the most powerful wand in creation (albeit that wand is safe in Dumbledore’s grave), he lost the Sorcerer’s Stone prior to his big battle with Voldemort. Remember: you need all three to gain mastery over death.

And yes, he can theoretically use Avada Kedavra to just straight-up murder Percy, but let’s be real: he’s never going to use that. Heck, he couldn’t even use Crucio on Bellatrix Lestrange effectively, and he wanted to do that.

So, sorry, Potterheads, but the Half-Blood kids might just have this one in the magical bag.

PrevPreviousA Rundown of Harry Potter’s Girlfriends, Flings, and Dates
NextIt’s Time to Answer Which Hogwarts House is the Best (And It’s Not What You’d Expect)Next